Now we’ve got the amp pretty darn quiet, in terms of vibration!

** By the way, GA-15 is identical to the Trace Elliot Velocette. The Gibson circuit board inside this amp even says “Velocette” on it! 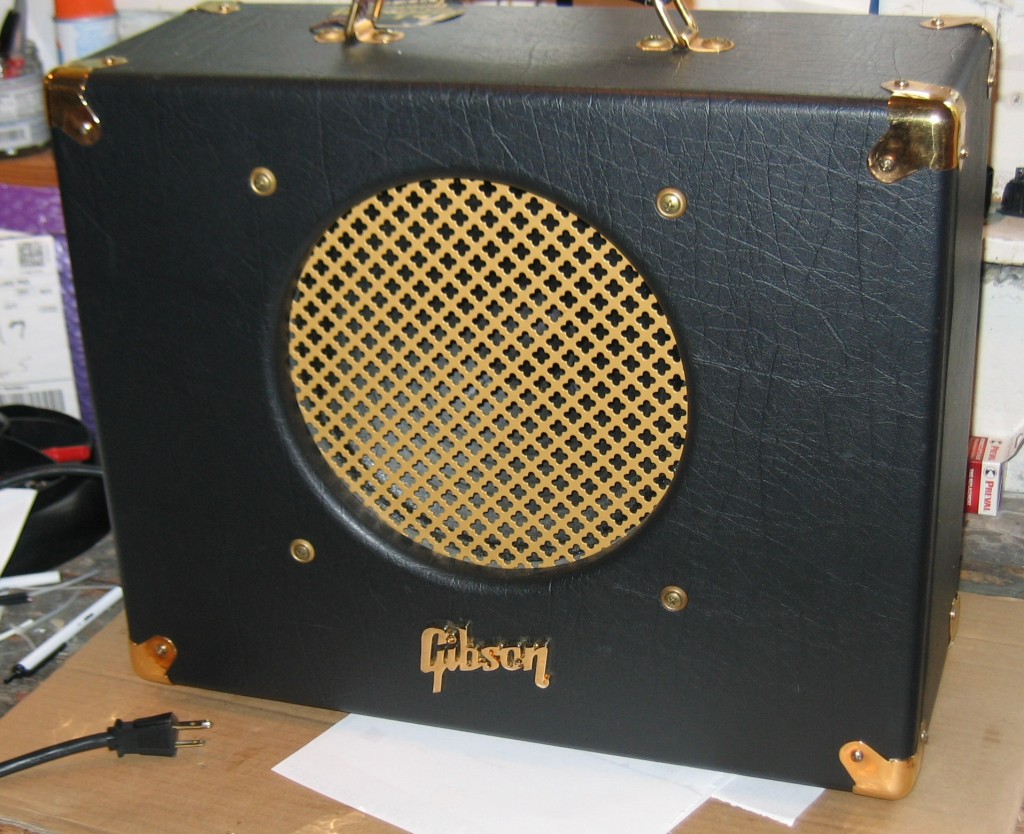 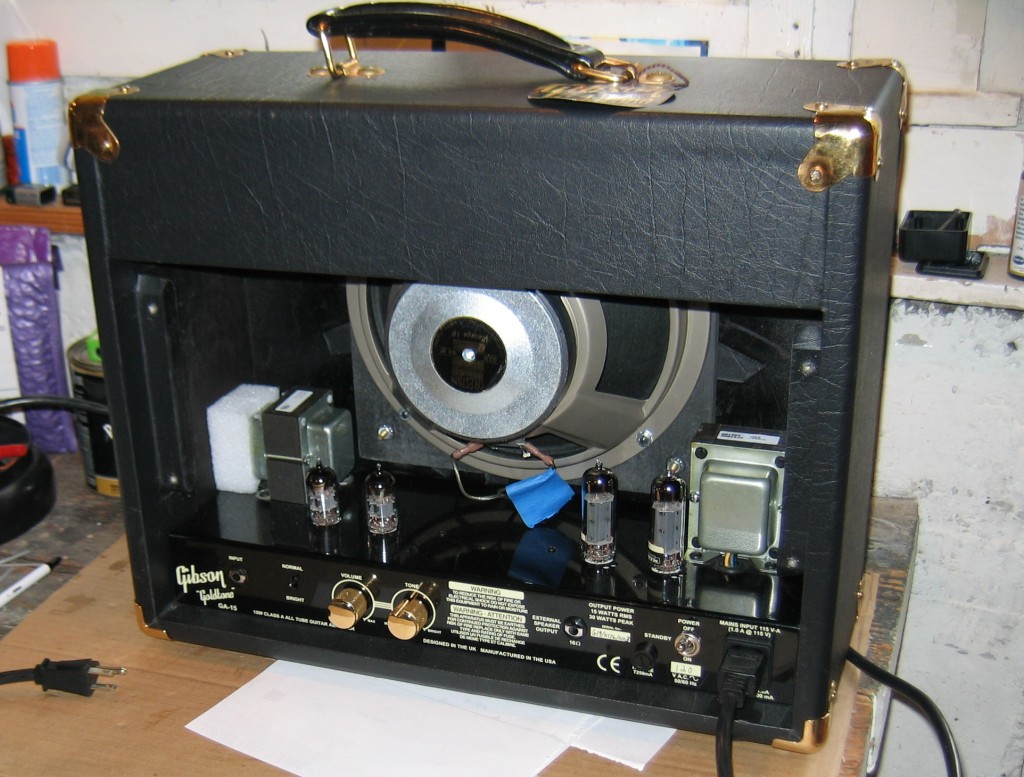 A “Silverface” (with a “Blackface” replacement control panel) landed in the shop a couple of days ago. Well actually, we had to haul it up the steps, and down the steps into the shop! be tha tas it may, the amp shad some serious hum in the reverb and some microphonic behavior during the first two minutes of operation, after which it quieted down. But the amp seemed to lack clarity and clean headroom.

Well now, after some work, this beast is loud and clear, no more reverb hum, and no more microphonic behavior. Unfortunately, the weight of the amp is the same !  😉

This amp is owned by a Mr. CD Woodbury.

I’m installing a new output transformer into Tim Lerch’s Princeton Reverb re-issue. The new output transformer is an Allen/Heyboer “TO-20.” It’s a much beefier part compared to the stock OT (see photos below, new OT is black, stock is silver)). I also installed a larger-valued power supply filter capacitor for the main supply voltage.

As a result, the amplifier holds together a bit better at higher volumes. Plus, I think the new OT makes the amp a bit more articulate.

“Paul. I really think it’s a lot better. More robust and the low mids seem more prominent than before. A good upgrade!” 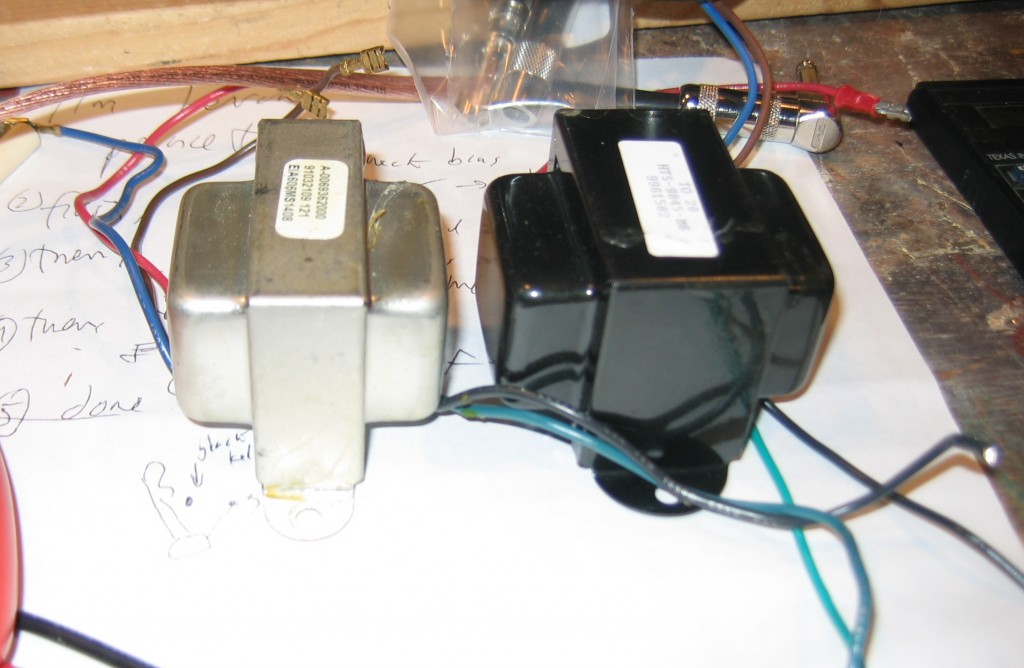 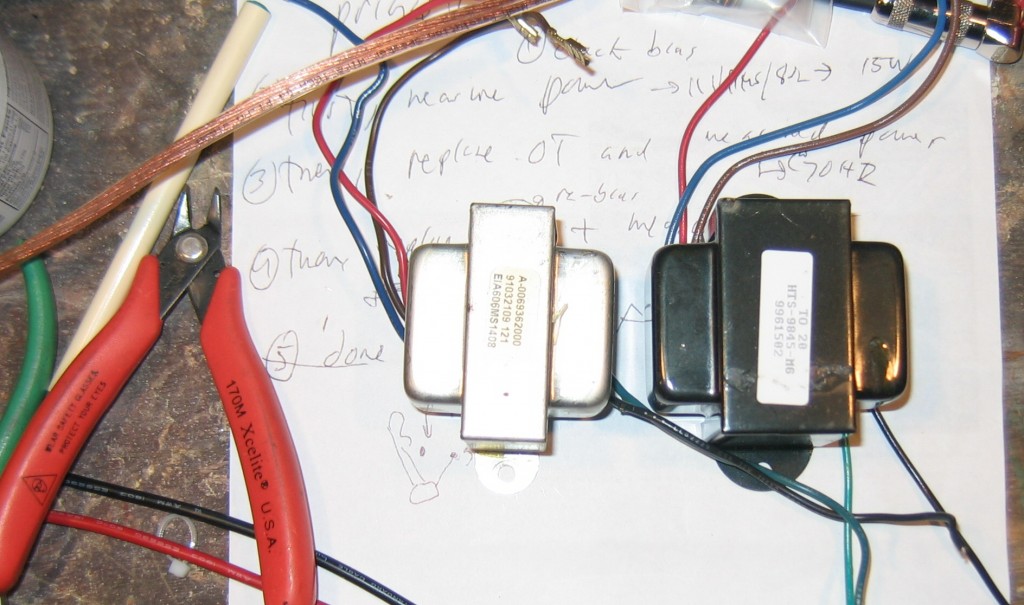 Another Blues Jr. in the shop.

Lots of distortion – and, after some investigation: bad solder joints where the power tube sockets mount to the PCB. I have seen quite a few Blues jr’s with this exact problem.

What causes this? A few things. One is that the power tubes are oriented so that the heat from the tubes rises upwards to the solder joints. And after many cycles of hot (when the amp is powered-on) and cold (when amp is powered-off) the expansion and contraction of the solder creates cracks in the solder, and hence, a bad connection

Two: Fender designs the amplifier with a bias that runs the power tubes (EL84’s) at 100% just sitting there at idle. This generates a lot of heat, thus further exacerbating problem # 1.

I always recommend a change (modification) to the bias circuit that throttles the power tubes back a little. This takes about 1 to 1.5 hours due to the way the amp is constructed. You have to do some disassembling of the amp to be able to get to the side of the main pointed circuit board, to remove and add parts, solder/de-solder, etc). It’s worth it for the reliability the mod adds to the amp. Plus ,the amps power (output) tubes will last longer since they are being operated at a cooler temperature (less quiescent power being dissipated in the power tubes)

So, its bad enoug 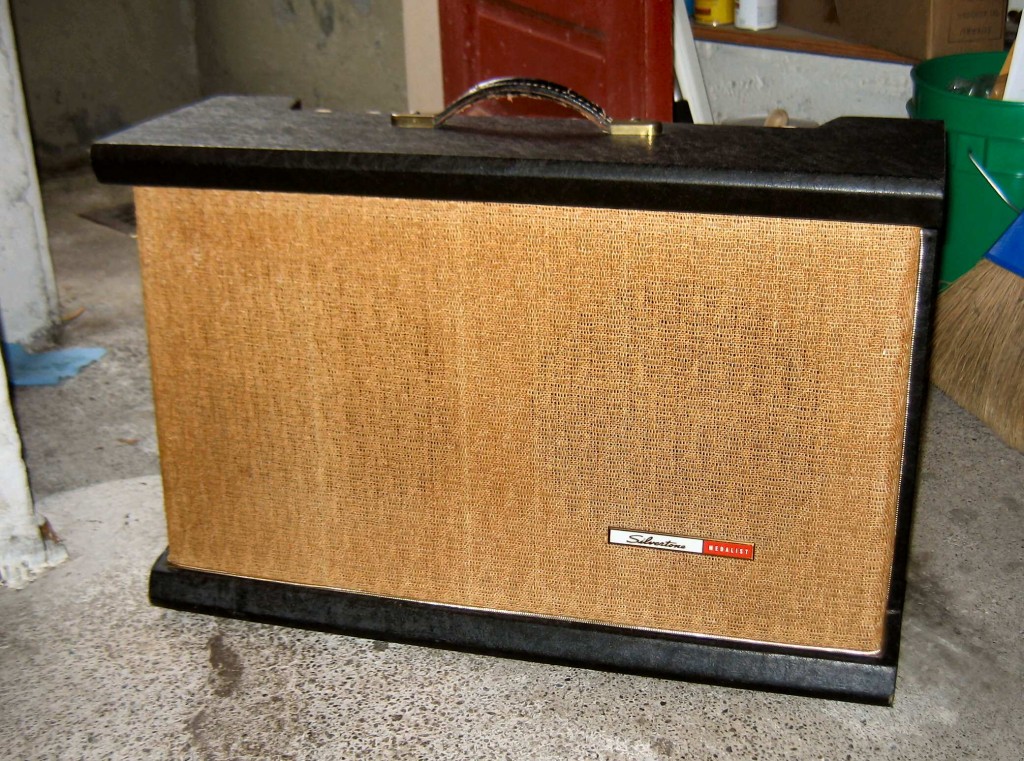 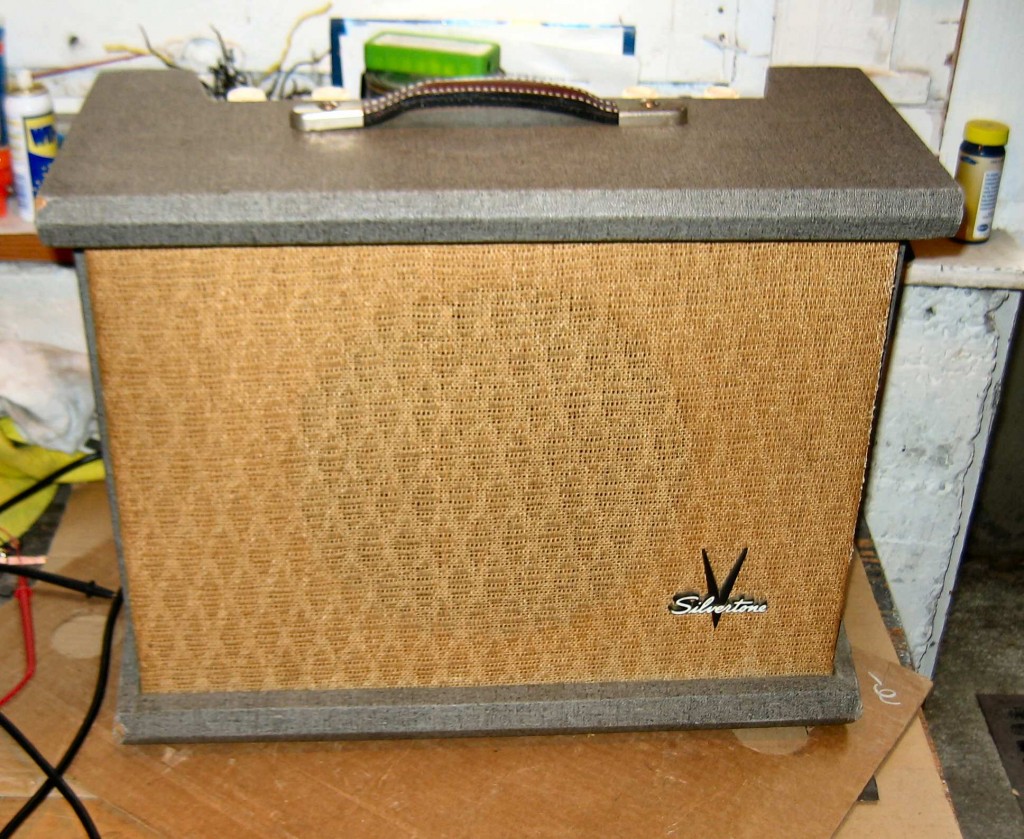 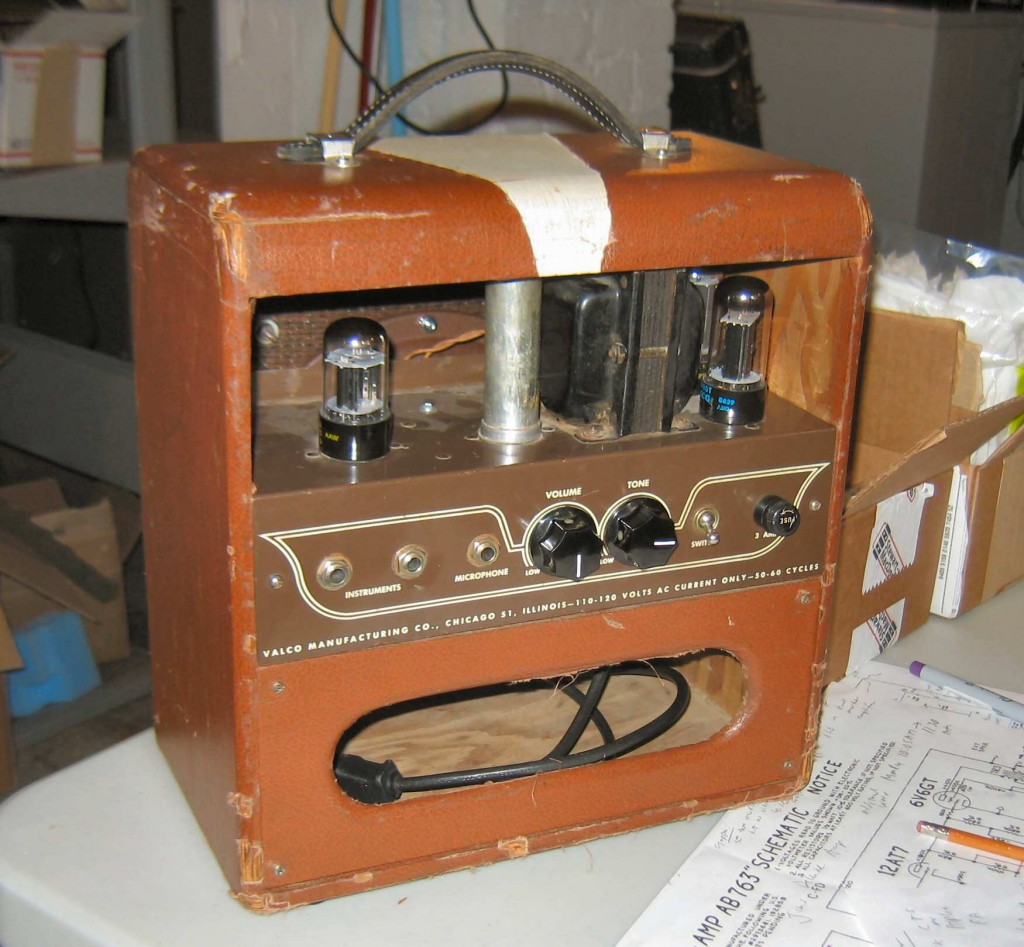 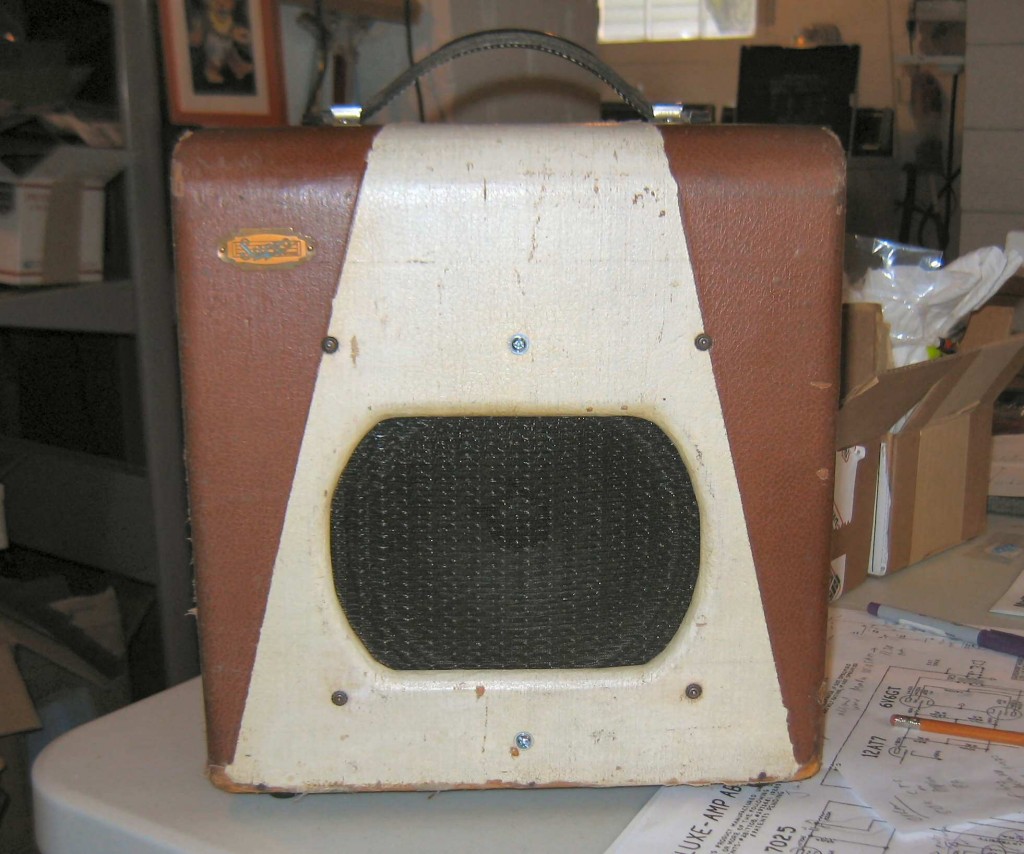 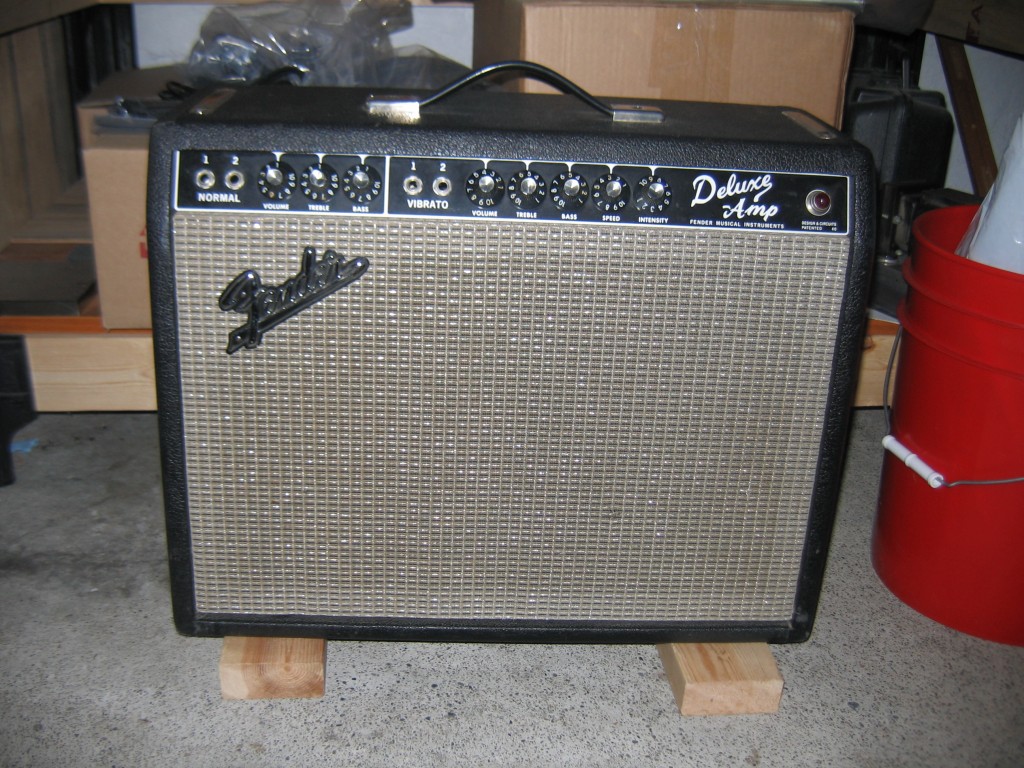 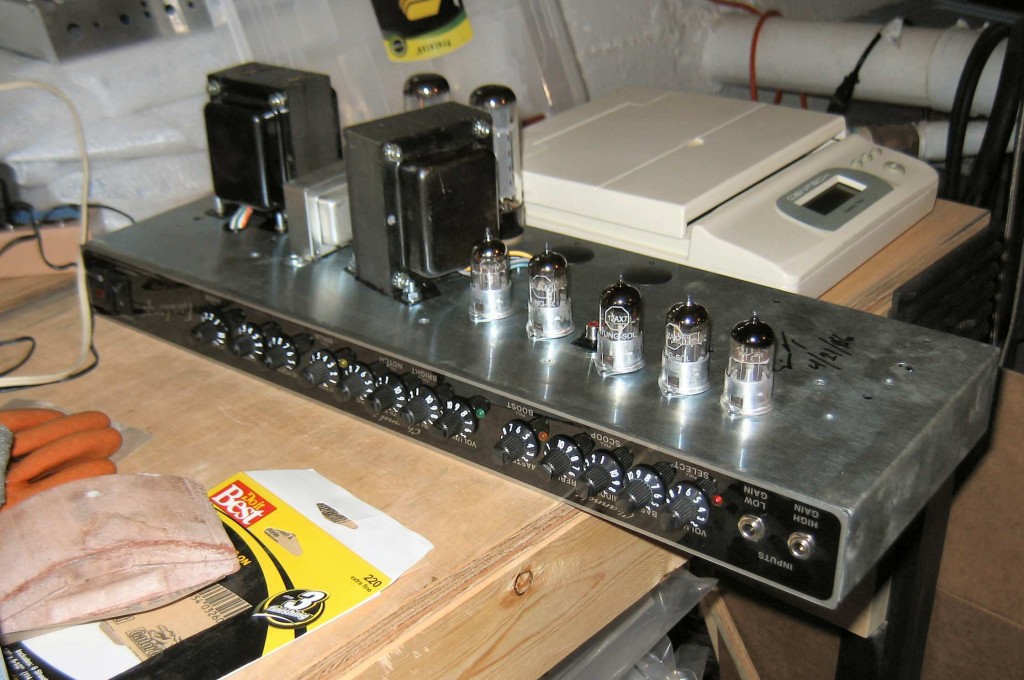 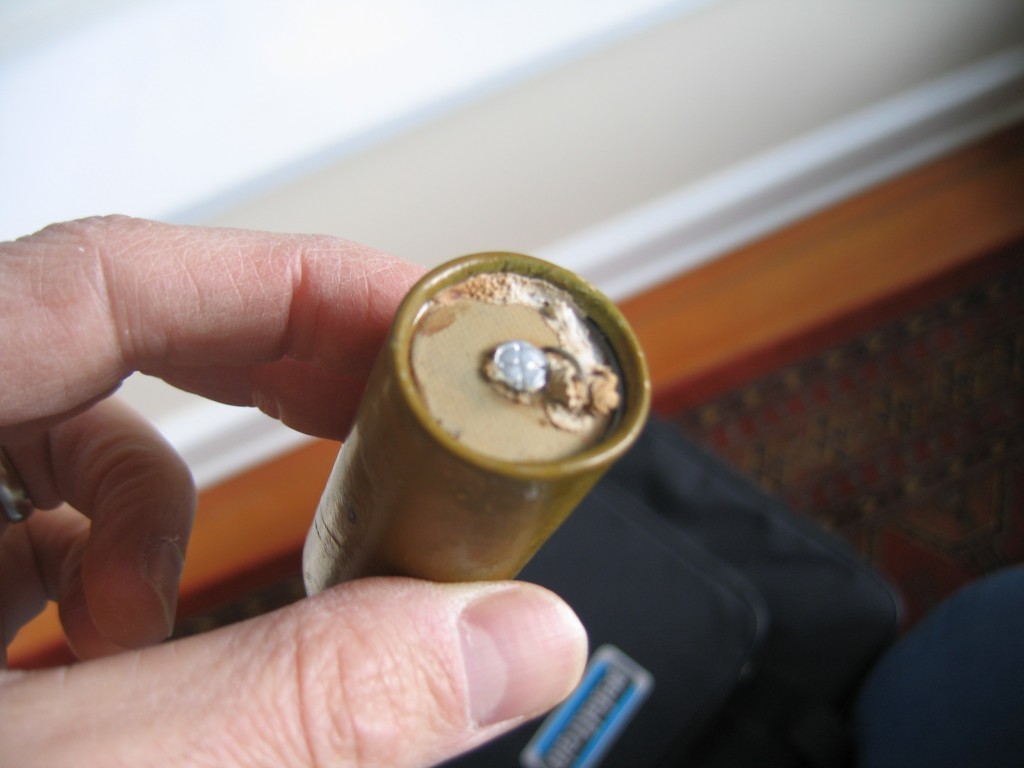 This one has gone its entire life (so far) without any of the electrolytic capacitors having been replaced. The end result is lots of hum and the amp is lacking some kick.

Look at the power supply caps (see photo below) you can see that one capacitor (farthest left) has oozed-out some electrolyte, and another cap (2nd from right) has a “pimple” that is about to pop and do the same thing – oooze out electrolyte.

This amp is going to sound so much (SO MUCH) better once the power supply is working properly! Can’t wait to here it then! 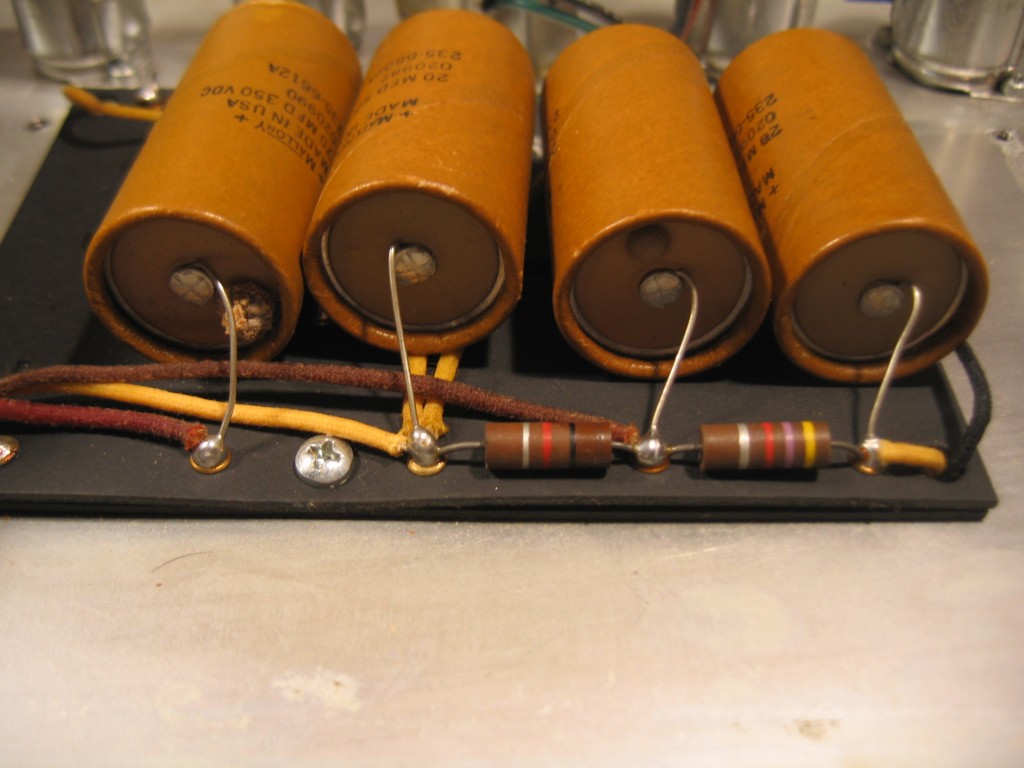 A silverface super reverb walked into the shop today…..Underneath the chassis I found very old, factory-installed electrolytic capacitors. Probably at least 40 + 5 years old. These have got to be replaced!

A lot of things happens, and doesn’t happen, to guitar amplifiers over the years. Sometimes, mods happen, and routine maintenance doesn’t.

I hope to get this amp into great shape. It has potential to be a wonderful guitar amp..just needs some TLC. 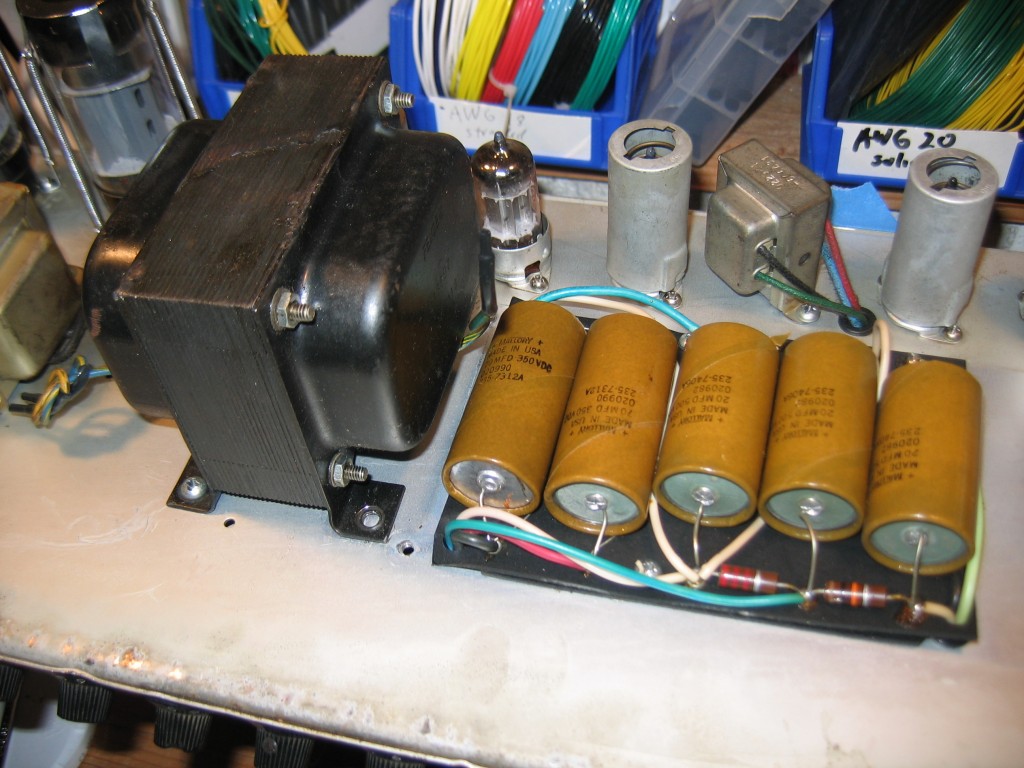 One of the power tubes wasn’t glowing – this means that the tube is not heating up to its operating point. A tube functions by heating a piece of metal so that it emits electrons. In order to do that you need a fair amount of current (~1A for a EL34, 6L6, etc) to flow through the tubes heater (or filament) circuit. This Marshall had a poorly soldered printed circuit board that was causing the problem. Instead of a resistance of an ohm or so, there was 2500 ohms in-series with the tube socket – in other words, the solder joint had a resistance of 2.5K !

Now this baby is cranking, loud!! 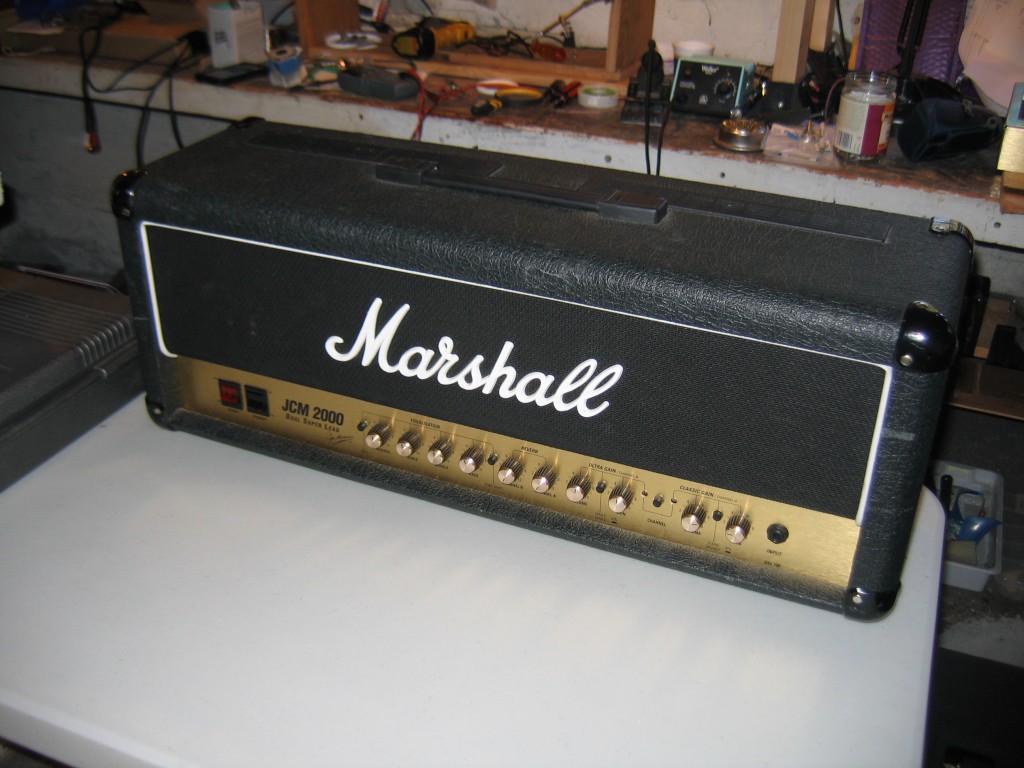 The owner reports that the volume is dropping in and out…

All four volume pots in this amp are bad. Cleaning them did not help. Going to put in 4 new volume pots. The amp is about 12 years old, so we’re going to replace the power supply capacitors as well as the output-tube bias capacitors. The large blue cans on the underside of the chassis house 4 of the main power supply filter capacitors. The top photo shows why replacing the volume pots is somewhat time-consuming: The pots are soldered to the preamp circuit board. In order to de-solder the pots (so you can remove them) you have to access the underside of the preamp board. 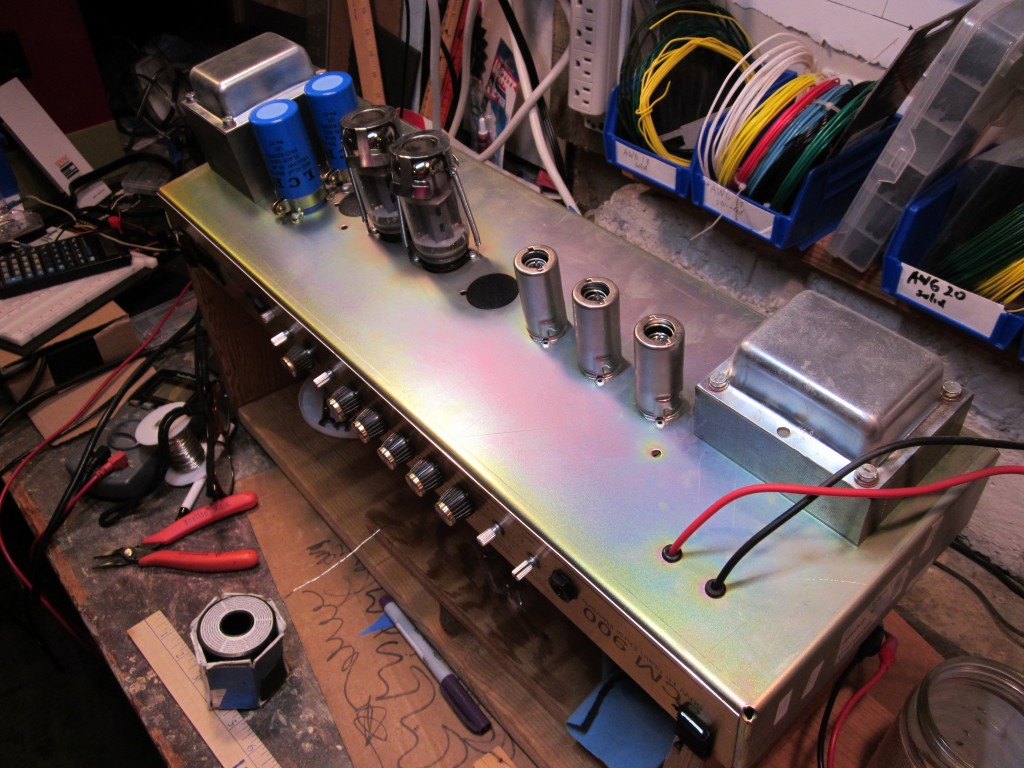 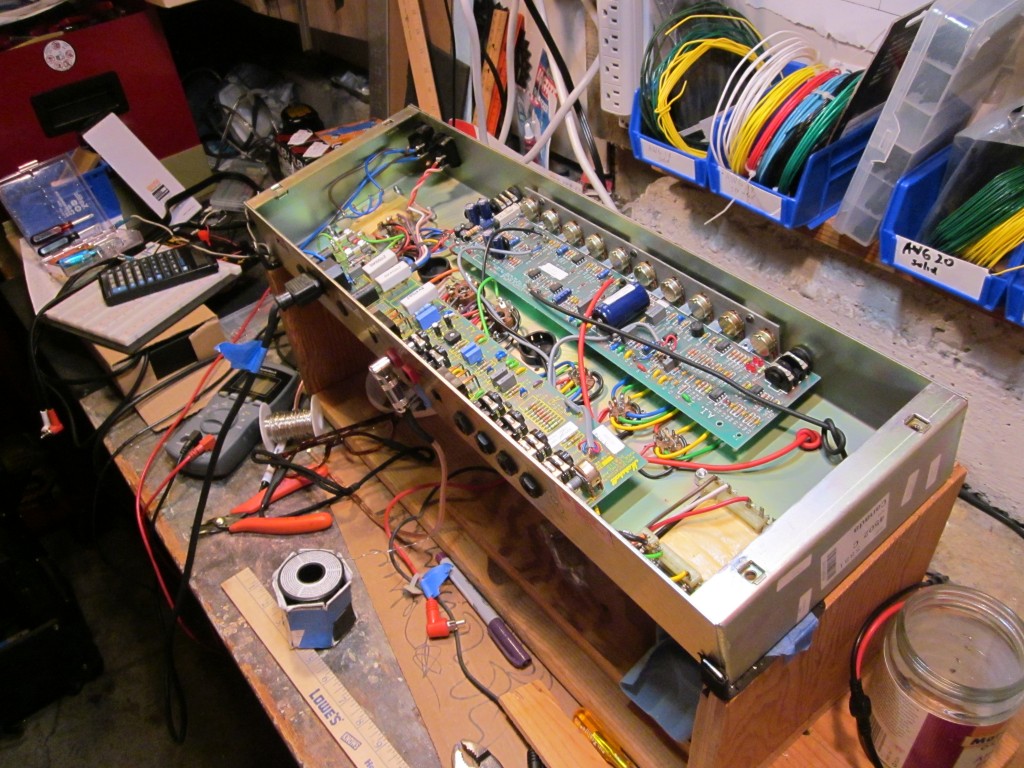